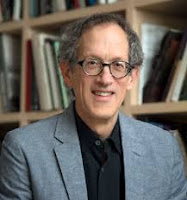 Richard Zoglin has worn many hats at Time Magazine of the the years, writer, critic, and editor. He's also written three books looking at the history of American entertainment: Comedy at the Edge: How Stand-up in the 1970s Changed America, Hope:, Entertainer of the Century, about Bob Hope and now Elvis in Vegas: How the King Reinvented the Las Vegas Show which is published by Simon and Schuster.