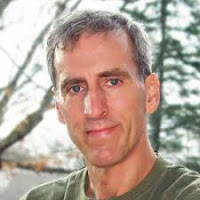 Tim Johnston's 2009 short story collection Irish Girl won the Katharine Anne Porter Prize in Short Fiction, and several of the stories won individual prizes, as well. His novels are Never So Green, Descent, which we spoke about on Book Talk back in 2013, and today we'll be talking about The Current, new for 2019, the story of two college students attacked near the Iowa-Minnesota state border that recalled the death of a young woman 10 years earlier, which was never solved and destroyed the bonds connecting several local families.